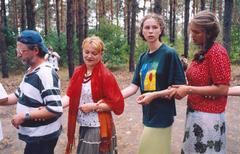 In 1990 on the base of Riga Russian gymnasium there was created the folklore studio, which in 1996 got name the Studio of Authentic Folk «Ilynsky pjatnitsa».
Folk group of studio took part in more than 40 folk festivals and science conferences in Latvia, Estonia, Russian, and Byelorussia. Three times it took the first places in All-Russian review-competition of children folk groups (1998 year in Kovrov; 1999 year in Vladimir; 2000 year in Pushkinogorye).

In May 2000 two members of folk group took part in competition "Dziesmu dziedu, kada bija" and had got the high rewards. In 1999 with the support of Latvian Funds of Culture Capital CD and audio cassette with folk group singing were publicized and the film was made "Morning in the brides house. Russian marriage in Latgalia" (Format Betacam). The film was demonstrated the 25th of September 1999 in canal TV-Riga.